The Dangers Of Speeding While Driving

It’s against the law to travel above the stipulated speed limit as speed restrictions are typically set in regard to traffic conditions and are intended to ensure the safety of road users. Choosing to drive above the speed limit is highly unsafe to the driver in question, their passengers, and other road users.

While it might not be at the top of everyone’s agenda when driving, it’s crucial to pay attention to the speed you’re traveling at, as it’s easy to get carried away and not even realize you’re starting to speed until you get pulled over or a fatal accident occurs. Driving at excessive speeds increases the chances of being involved in a collision with other vehicles, objects, and even pedestrians. With this in mind, all drivers have a part to play if the number of speeding accidents nationwide will reduce.

Why It’s Dangerous To Drive Above The Posted Speed Limit

Speeding goes beyond driving beyond the posted speed limit. It can also be racing with other drivers, driving recklessly through construction zones, refusing to decelerate on slippery or icy road surfaces, and so on. Besides car accidents, some of the risks drivers are exposed to when they speed include but are not limited to the following:

Aside from the safety risks involved, speeding drivers will likely get speeding tickets and points on their licenses constantly. Being booked for speeding can also lead to increased insurance rates, added fuel costs, and increased wear and tear of one’s vehicle, in other words, more maintenance bills.

No matter the reason or circumstances, speeding can be very dangerous to the at-fault driver and anyone else in their proximity. The following are reasons why speeding is never the right action, even if the situation says otherwise.

1. Speeding Is One Of The Most Pervasive Causes Of Traffic Fatalities

Traffic safety facts show that speeding significantly contributes to over 32 percent of annual automobile fatalities. Besides this, driving aggressively is the second leading reason for so many auto crash incidents and yearly motor vehicle fatalities.

2. Injuries Can Be Quite Severe, Even Life Altering

Speeding significantly increases the chances of being severely injured if a crash ensues. Drivers can be paralyzed, endure head injuries and more in severe accidents.

3. Speeding Drivers Will Often Engage In Other Risky Behaviors

Data on aggressive driving behavior show that drivers who are fond of speeding will more often than not engage in other forms of unsafe driving behaviors like running red lights, tailgating, switching lanes, and so on.

4. The Damages Can be Very Expensive

Getting caught speeding can attract considerable penalties, putting a dent in your finances. A first-time offense can lead to a fine of several hundred dollars, although the amount can be higher depending on the severity of the offense. Being arrested for subsequent speeding offenses can lead to much steeper penalties, perhaps even losing one’s license.

5. It’s Detrimental To The Environment

6. There’s An Increased Chance Of Losing Control Of One’s Vehicle

Driving faster than required speed limits is the leading cause of deadly crashes and fatal accidents as aggressive drivers lose control over their vehicles when they speed and are also mainly unable to respond to situations that demand a quick response effectively.

7. Speeding Drastically Reduces Reaction Time Which Can Lead To A Car Accident

Driving at maximum speed can reduce a driver’s ability to respond quickly enough to avert a car accident.

People speed for different reasons, some of which have nothing to do with aggressive behavior. At times people speed when they’re running late to avoid getting caught in traffic or simply due to a disregard for the law. Here’s a full rundown of why people engage in this unsafe driving behavior even when they’re well aware of the risks.

Running late for appointments, work, school, and other engagements is the primary reason why people speed. In addition to this, drivers can easily get distracted by the repercussions of their lateness which can take their attention off the road.

Some drivers drive above the required speed limit without necessarily displaying any signs of aggressive behavior. In contrast, others speed in an attempt to avoid getting caught by traffic authorities after violating some sort of driving regulation.

It’s easy to get frustrated when caught in heavy traffic. An impatient driver will hardly ever miss the opportunity to step on the gas if they feel doing so will give them an advantage or help get them out of congested roads. Such drivers are also likely to change lanes frequently and without any warning and will go out of their way to express their frustration even with the slightest provocation.

Utter disregard for traffic signs and speed limits is the third leading contributing factor to fatal automobile crashes. Several forms of distractions can cause a driver to speed, for instance, conversing with passengers, operating an electronic device, tuning the radio, or trying to reach for an item.

It’s quite similar to drunk driving as all of such distractions can cause a driver to be unaware of the fact that they’re speeding, which can lead to serious injury during bad weather and when driving on bad road conditions.

Speeding is at the forefront of almost every road safety issue. One could even go as far as to say it’s involved in all fatal road crashes. It’s practically as simple as - no speeding, no fatal accident.

Driving at maximum speed almost negates one’s ability to react accordingly to a sensitive situation that, if not handled adequately on time, could lead to a severe accident. The higher the speed, the more impact at which a vehicle will collide into an obstacle or another vehicle.

Below are some speeding statistics that might help you reconsider whenever you’re about to speed.

A recent study by the AA Foundation and National Highway Traffic Safety Administration describes excessive speeding as an endemic. It was described in this manner because the act of speeding isn’t limited to young male drivers, teen drivers, or a specific age group.

Knowing fully well that speed kills and is the major cause of fatal crashes and auto accidents, some irresponsible drivers choose to ignore speed limit signs for the thrill of it. Others engage in this unsafe driving behavior as they believe it to be an acceptable social norm.

The legal repercussions of speeding often depend on the circumstances that led to the event and the impacts after that. A speeding driver would typically be pulled over and given a speeding ticket when spotted by traffic authorities. This can also be accompanied by points to their license. A ticket fine for speeding can range from $75 to $450, depending on the driver’s record and the state in which the ticket is issued.

You won’t lose your license for a first or second reckless driving strike but this is only if a crash doesn’t occur. However, you risk losing your license if you get caught driving at high speeds in the same year or within three years.

The impact of an auto accident almost entirely depends on the speed at which the careless driver is traveling, all the more reason to avoid speeding and stay within the speed limit at all times.

Regardless of who is at fault during a high-speed crash, you must first check on all the other parties affected by the accident to see how they’re faring. Next, you must inform the police of the road rage incident and the crash severity. 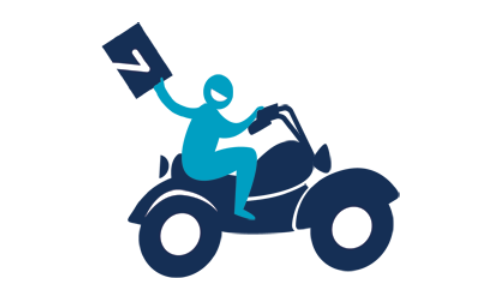